I recently spent some time "surveying" bagpipe judges from around the world, and taking mental notes on key concepts regarding pipers reaching the next grade level. This wasn't an official double-blind, triple tested, bell-curve study - I simply asked judges that I knew one simple question:

"What are the top reasons piper's fail to reach the next level?"

Out of the 20 or so judges I spoke to, I probed each of them enough to get 3 to 5 specific reasons out of them. Here's a few other things I included in my un-scientific (but, I think somewhat "clever") questioning:

What's interesting is, with very few exceptions, the same 5 items popped up in every conversation.

I suppose we all knew this was coming.

However, I think it's important to mention that, in this case, this means the rule, not the exception. In other words, sloppiness in fingerwork was the prevailing pattern in unsuccessful performances (as opposed to the occasional sloppy passage in a tune).

Obviously, sloppiness can and will creep into essentially anyone's performance from time to time. However, players that fail to reach the next level will have "chronic," consistent issues with:

Even when I asked specifically about higher grade levels, this was still a big issue.

The bottom line? People are unsteady; "sagging" or "surging" on their blowing on such a regular basis that it severely distracts from the music.

It's very easy to get lost in the fingerwork aspect of playing, and lose track of the concept of steady blowing. When I asked the judges, they all agreed that some sort of feedback, whether it be a private teacher and/or a consistent routine with a manometer, was what the successful players had in common.

What is meant by this? Well, it's fairly simple really - players that are successful are able to keep a steady tempo throughout a tune, and unsuccessful ones can't.

Many players will slow down during difficult sections, and speed up during the "easy" parts. Sometimes, the opposite is true.

Another common mishap is a continual acceleration throughout a performance, due to a habit of regularly rushing the beat.

Judges commented that players known to have a private teacher, or a game-plan that utilized a metronome on a regular basis were able to prevent these issues.

4) Inability to Complete a Performance without "Blunders"

The definition of a "blunder" is simply a big enough mistake to disqualify a performance. Examples might include:

What causes these blunders? Lack of preparedness? Lack of confidence? Remember, in general the judges are citing a repeated inability for a player to get through a performance without blundering.

So, if you're having trouble with this issue - it's time to get serious about not blundering.

One of the more interesting common responses from the judges I interviewed was that performance anxiety tended to be a huge reason pipers were unable to put together good performances.

What causes players to be scared of performing for the judge? What sort of remedy would help a player learn to transcend this issue?

While the following did come up from time to time, it was quite interesting to me that none of these were regularly occurring reasons that a piper didn't reach the next level:

Getting to the Point: Successful Piping Performances are More Than Just Practicing Some Tunes and Playing Them In Front of a Judge

So, if you're a person who's struggling in your own piping to reach the next level - are you being held back by any of the above? If so, what is the solution to this problem?

Let's turn to the successful pipers (at all levels) for guidance as to the right way to approach solo competitions. It's so much more than just practicing some tunes and then playing them in front of a judge.

What do the players that are winning and/or reaching the next level do to be so successful? Here are some common "denominators:"

Get Our 6 Month Road Map

Based on many of these ideas, here at the Dojo we've developed a "BluePrint" for next-level success. It is a 6-month chart, customizable for any level and any repertoire, that shows literally every day of a 6-month preparation plan for solo piping success. Click Here to Get it for FREE.

During each month of the plan, we focus on a specific task building up to a goal event 6 months away. Examples of tasks include selecting the right tunes from a "short list," working on weaknesses in our chosen tunes, focusing on memorization of our chose tunes, focusing on clarity of embellishments, focusing on rhythmic control and expression, and, lastly, we focus on preparation for the contest or major performance.

Simultaneously, we gradually build the tempo, using percentages of the goal tempo as a guide. For example, in the early months, we'll play at 50% goal tempo, then 55%, then 60%, etc. You'll know exactly when to play what, and at what tempo on any given day of the plan.

Every week, there is a recording day. This is where you get your repetitions that you need under pressure. How do we simulate the pressure? Well, we impose a simple rule on ourselves: we only get one chance to make the recording. We do one "take," and send it to our instructor or mentor for feedback. Trust me; at first you'll be plenty nervous. But what do you suppose happens after several weeks of recordings?

Myself and my staff have used this plan with literally hundreds of students, with an 87% success rate (for those who actually do the plan, that is). Click here now to get your free blueprint, and get to the next level in 6 months!

If you've been piping for a while, you may have heard a tune whose melody or groove just stuck with you, and that you absolutely… 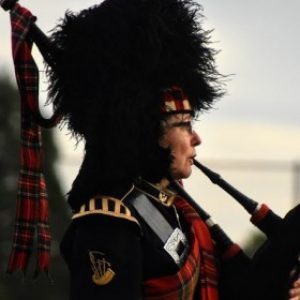 My father was a piper, so I grew up listening and loving the sound of the bagpipes. I'd always wanted to learn, but it wasn't…

Hi Raleigh, Your recording made me want to cry. I heard the best performance you have ever produced. You were doing everything right. You took…

https://youtu.be/TjdX-3zBCrs Hi Dave, Thanks so much for this submission. Another very solid performance, that's 3 in a row and across different idioms. Great work. I…

When we listen to the great players, embellishments really do seem like rocket-science. How the heck are those players getting that sort of sound to…