Do you play your tunes too fast so you can’t hear your mistakes?  Or maybe you always keep the metronome at the same easy tempo for every practice session?  How do you know what tempo to choose to improve your playing?

Andrew walks you through why choosing the correct tempo for practice is a major factor in your ability to improve.  While the perfect practice tempo is not the same for everyone, finding the right tempo for you is a simple process everyone can use.

Now, in the real world or in the objective world, let's take the world of sport. Threshold is really easily discussed and thought about and makes total sense and it's totally obvious. Let me give you an example. I can run an eight-minute mile. Actually, I'm not sure I could right now, but conceptually I can run an eight-minute mile. That's about as fast as I could run it. Now, if I want to develop my running and if I want to get faster, trying to run a six-minute mile would be a huge mistake.

Janet says, "You need to work up to that."

Brian says, "Too much too soon." I love this. This is giving me great ammunition.

Meanwhile, the correct thing to do would probably to shoot for maybe 7:45, right? Meanwhile, if I run an eight-minute mile and I want to improve, shooting for 7:45 might be the better way to do it. Then what we're going to do is gradually increase the pace of our mile over time.

The mile is a big body of work, right? We need to be able to sustain our bodies for quite a long time in order to run a mile, right?

Meanwhile, here's the other thing to think about, though. If I just keep running eight-minute miles, am I going to get any better? No.

Don't get me wrong, I think it's possible to continue to run eight-minute miles while focusing and changing our technique, to make running an eight-minute mile easier, and then the next time we attempt to go faster, it's going to go well for us. I don't want to confuse the issue too much.

Now, the issue there is just discussing our threshold.

Dave, it's all right.  It sounds like Dave might actually be a runner, or a worker-outer. Oh, he's a swimmer, there you go.

And then John says, "A 10% increase in tempo for me is often too much jump at one time."

You know, we're just kind of thinking of this, this is just a thought experiment. That person, the average person, is playing above their threshold.

Now, going back to running. If we continued to attempt to run six-minute miles, Ephriam says, "We're going to burn out early, we're probably not even going to finish the mile, if we try to run it in six minutes."

But if we keep doing that, if we keep bashing our heads against the wall, what is going to happen?  John says, "Maybe you'll get injured."

That's probably not going to happen in piping, but you're probably going to develop bad habits. Agree? Let's bring our athlete back into the mix. Bad habits probably, right? And then fail and give up?

Dave says, yes. Okay, good, Dave and I are back on the same page.

"Fail and give up," Brian says, yeah.

You know, the problem with piping is, everyone's like, "Oh my God, it's so great. You play bagpipes? That's so cool."

Then your instructors are usually like... They don't want you to fail and quit either, so they're like, "Oh my God, it's coming along, keep at it."

It's different than when we run the mile, right? If we run the mile and your mile is eight minutes, what do people say? "Hey, good job. That's an eight-minute mile." You know, because that's what it is.

But, in piping... We attempt to run our six-minute mile in piping, and it doesn't go very well for us, and people are like, "Hey, great job, keep at it." Which is good, okay. It's good, but it doesn't give us the dose of reality we probably need to acknowledge the very important reality, which is, that we are operating far above our threshold.

Right? Everybody agree? We're operating far above our threshold.

If you just play faster there, it's over sooner, but that's, of course, not the right thing to do. In real life, if we're playing a sport or if we're running, it could result in actual injury, and it's certainly going to result in the development of bad habits.

What is the correct threshold for us to operate in?

We already sort of talked about it with running, right? If our current personal best is an eight-minute mile, the threshold for us to operate in should be just slightly faster than an eight-minute mile. Let's make our goal for this mile--and again, I'm generalizing, sorry for actual athletes here--but, let's make our goal is 7:45, and then if we run and we get 7:45, great! Now we could increase our threshold to an even better time, 7:30. Then maybe, in shooting for 7:30, maybe we go back up to 7:50 in the next attempt, then maybe we get all the way down to 7:37 on one attempt. But, at that point, you're kind of operating in the appropriate threshold, if your goal is to improve the time of your mile.

Brian says, "Our threshold is our own tempo, man."  Yeah, but if I continued to run eight-minute miles and I don't really try to run any faster than that, generally speaking, we're just staying in our comfort zone and we're not actually moving forward. We can't just arbitrarily say our own tempo, we need to be more specific.

Beth says, "The tempo at which we can play well."  Getting warmer, I think. I don't think we're quite there.

We want to start in our comfort zone, John says, and then we want to increase the tempo over time to find the point where mistakes start to occur. I kind of like that, I think that's basically it. It's not about having perfect control, either. We need to just figure out where that line is, where things start to break apart, and that would be our current threshold.

Perfection is kind of not what we want, right? At least not until we get to that optimal tempo. We know optimal tempos, generally speaking, kind of exist, like a jig's optimal tempo is around 120 beats per minute. Strathspey's optimal tempo is around 120 beats per minute, could be a little bit more. So, once we're there and we're achieving perfection, great, but most of us are not there. What we actually need to do is we need to find the threshold where things start to break, things become perfect, but then they start to break, and that's the appropriate tempo for us to play at.

Lou says, "Reach your breaking point and pull back a bit."

No, reach your breaking point and practice there. 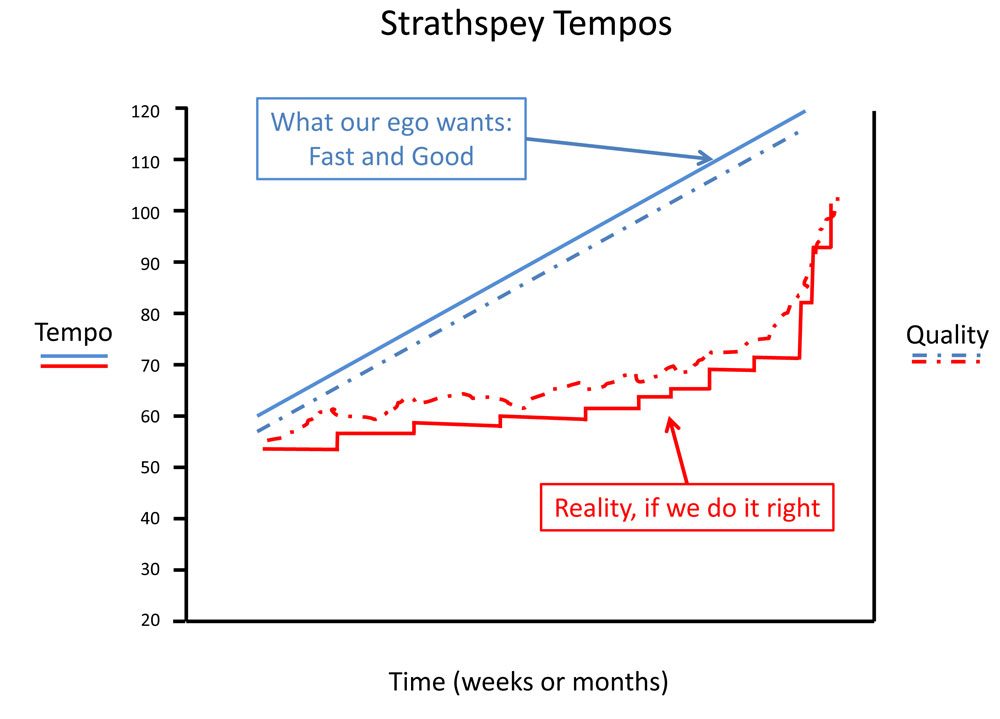 Some pipers think that it is really hard to play fast, but they’re wrong. It’s very easy to play fast, even at a tempo that comes close to matching that of Stuart Liddell. Thus, a fast tempo is really no problem at all. The problem arises when we expect to play fast and at the same time make anything that sounds close to good music.

How long does it take you to learn a tune? Do you work on it for weeks without much progress? Does it take you months to memorize a new tune and still have parts that cause your fingers to stumble?

Join us as Andrew walks you through a simple process to learn a tune. Practicing is not enough. Follow this foolproof method to have any tune up and running in one week!

How hard should your chanter reed be to blow? Despite what you may have heard in your travels with different instructors and bands in the…

When you are learning a new jig, do you often have trouble staying “on the beat” because you are using all of your concentration just to play all of the melody notes, gracenotes and embellishments correctly? Then, after you get those pesky things out of the way, are you still having trouble getting that “jig feel”? Using a metronome during your practice may well be a useful tool for you.

As a younger man, I worked at night. I was able to practice four to five hours before I went to work. When I returned home at the end of my shift, I’d practice for another two. I made quite a bit of progress and, as a result, identified six hours of practice as the minimum I needed in order to progress.