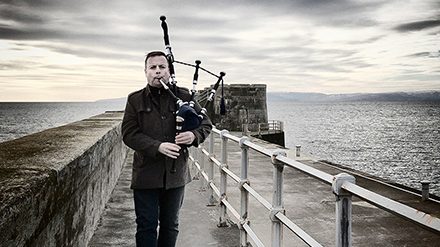 In 1990's World Pipe Band Championship competition, there were more examples of bands performing his music than any other composer, living or dead. Michael Grey led a renaissance of new bagpipe compositions through the 1980's and beyond, and did so from outside of Scotland. In this class, he will walk us through compositions from various stages of his career, and share some of the methods behind the madness!

With many major solo titles to his credit, successful books of music on the shelves, compositions in the repertoires of bands the world over, Michael Grey is undoubtedly one of the world’s foremost pipers.

Michael Grey, He received his early lessons at thirteen from George Walker of the 48th Highlanders of Canada and was a member of this illustrious band for three years. He studied under John Wilson, one of the twentieth century’s greatest players, and received extensive tuition from Bill Livingstone and John Walsh. He has four times won the North American Championship, the overall title at the Vancouver Indoor Meet twice, the Piobaireachd Society Gold Medal and that venue’s March, Strathspey & Reel and Former Winners’ MSR on the same day. In 1989 he won the aggregate championship at the Cowal Highland Gathering. He has seventeen times won the professional Ontario Championship Supreme awards for both classical (pibroch) and light music. In 1995 he won the Toronto Piper’s Society Knock-Out final; in 2003 he again won this testing event – for the third year in succession.

Since his early piping years Michael has been a prolific and innovative composer. Evidence of this remarkable composing success is apparent in the on-going popularity of his tunes with bands and individuals at the major competitions: at 1990’s World Pipe Band Championship in Glasgow, there were more examples of bands performing Grey’s tunes than any other composer, living or dead. In 2001 he was commissioned by Piper & Drummer magazine to compose a new pibroch aimed at pushing the musical boundaries of the traditional form.

A founding member of the 1987 World Pipe Band Champion 78th Fraser Highlanders Pipe Band, the first band from outside of Scotland to win the title, he left that organization in 1995 and became Pipe Major of Peel Regional Police Pipe Band, one of the world’s top bands. In 1999 Michael left the PRP Pipe Band to focus on solo piping; this same year he won the Scottish Piping Society of London’s (UK) Strachan Cup and again was the aggregate winner of the Vancouver Indoor Meet.

In 2003 Michael consulted with renowned composer John Beckwith’s commission for pipes and orchestra, A New Pibroch. Grey performed the piece’s premiere in March 2003; the piece aired in June of that year on CBC Radio 2.

An adjudicator, workshop leader and a serious student of written pipe tunes and their composers, Michael has seven published books of music and nine solo recordings including the December 2009 release, “Unqualified Favourites“. His fifth book, “Music for Everyone“, was published in November 2006 and is currently available free online.

In October of 2007 he joined the premier grade Toronto Police Pipe Band in the roles of music director and Pipe Sergeant and left the band in September 2013. He was a member of the legendary, Glasgow Police Pipe Band from November 2013 to August 2018.

He is currently at work on his tenth solo recording, a still-to-be-named mostly-acoustic project.

On January 30, 2016 he performed as part of the “LiveinIreland87” project at a sold-out Glasgow Royal Concert Hall, an initiative he directed in conjunction with the Celtic Connections music festival. The concert was recorded live by the BBC for broadcast.

The popularity of the concert, and the project, continues and was reprised on Saturday, February 25, 2017 show at Belfast’s Waterfront Place. The show marked the 1987 performance which stands as a milestone in the professional presentation of pipe bands in an indoor concert setting. Youtube has a load of recordings from both shows.

Most of his music is available on iTunes.

His seventh book of music, “Even More Music for Everyone”, was released in August 15, 2018.

A native of the Eastern Townships of Quebec, Michael Grey resides in Dundas, Ontario.