If you have answered “yes” to any of these questions, the solution may lie with your drone reeds that are wasting way too much air. Fixing that problem requires “drone reed calibration”, which when done properly produces a bagpipe that is a true joy to play.

Drone reeds need to be adjusted so that they are most efficient, meaning that they take just enough air to produce a great sound, but not a bit more. Any air that goes through a drone reed but is not used to produce sound represents wasted air and wasted effort.

If the reed tongue is too open (too far above the body of the reed), excess air that is not used to vibrate the tongue escapes into the atmosphere, its energy wasted. Such a reed that is too open is like having a hole in your pipebag. Thus, an un-calibrated drone reed takes too much air and needs to be adjusted, even though the manufacturer may claim that the reed is “ready to play”. The wasted air, like a hole in the bag, leads the piper to exert far more energy into blowing than should be required, resulting in unsteady blowing and early fatigue, among other unwanted effects. Therefore, it should be easy to understand why drone reed calibration is the last of the critical “four questions” we should all think through every time we take out our pipes: 1) Is my bag airtight? 2) Are my joints airtight? 3) Are my reed seats airtight? 4) Are my reeds optimally calibrated?

Calibrating drone reeds results in vastly improved ease of blowing because all of the air put into the bag now goes to the chanter reed and to each of the drone reeds, with none being wasted. Playing for a much longer time becomes easier, even with a harder reed, and more time can be spent concentrating on fingerwork fundamentals and blowing with better tonal quality. Tuning the drones also gets easier and more precise, due to the fact that well-calibrated drone reeds are less susceptible to pitch changes.

Calibrating your drone reeds is straightforward and carried out only after one has determined the chanter reed’s “sweet spot”. There are several Dojo University classes where the sweet spot is discussed. (Just search for it!)

After you’ve found your chanter reed’s sweet spot, and marked that point on the manometer, the goal then becomes to have each of the three drone reeds CUT OFF at a predefined point just above the sweet spot. Exactly where this cutoff point should be depends to a large degree on the ability to blow steadily. Determine your own cutoff point by playing a simple tune with the manometer attached. Notice the point of maximum pressure (water level) deviation, and place a rubber band at that spot on the tubing. We want the drones to shut off at that point, at least in the beginning. The extra distance above the sweet spot to your cutoff point allows for some unsteady blowing at first, but that position will come down as blowing steadiness at the sweet spot improves.

After the cutoff spot is identified, the chanter may be removed and a cork placed in the chanter stock. Now, to calibrate the middle tenor drone reed, insert the manometer tubing into the top of the outside drone. Make sure it’s snug. Strike in the bass and middle tenor, and increase the air pressure inside the bag by blowing and squeezing, all the while watching the water level. If the middle drone is still sounding at a pressure above the predefined point, the reed is too open and inefficient and must be adjusted. Take out the middle drone from its stock, and “shorten” the reed’s tongue a tiny amount. Shortening the tongue moves it closer to the reed body and closes the opening ever so slightly. Put the drone back in the stock, and repeat this process. Even very minor adjustments of the bridle can make a big difference, but through multiple tries, you will eventually get the middle tenor to stop exactly where you want it to stop, at the cutoff point.

After you’ve calibrated the middle tenor drone reed, the manometer is no longer needed. Now adjust the reeds of the bass and outside tenor so that they both stop precisely at the same time as the middle drone reed. Patience and a lot of trial and error are key in this process, but you will see untold dividends as a result. Once calibrated, the drones should remain relatively stable until a new reed is put into the chanter, at which point the reeds should be again calibrated. As blowing becomes steadier over a few weeks of practice with the manometer, it’s a good idea to recheck the point of maximum deviation of our blowing. It is likely that the drone reed tongues may be even further closed down a bit so that they take even less air.

There are only benefits to calibrated drone reeds, but one difference may surprise you. Many of us have been struggling and blowing way harder than necessary for such a long time that there is an enormous tendency to continue to blow with the same vigor (and red-faced frustration) AFTER the drone reeds have been calibrated. But that exertion is no longer needed. In fact, overblowing will now shut off the reeds earlier than you’ve possibly ever experienced. Resist the urge to open up your drone reeds when you experience cutoffs from overblowing. Get used to your more efficient and airtight pipebag with its newly calibrated drone reeds. Most of us will be thrilled to have a bagpipe that has never been easier to play, and with a much improved tonal quality.

Download our free guide detailing the 4 basic steps you need to master to make your bagpipe fully efficient (i.e. easy to play!!!) 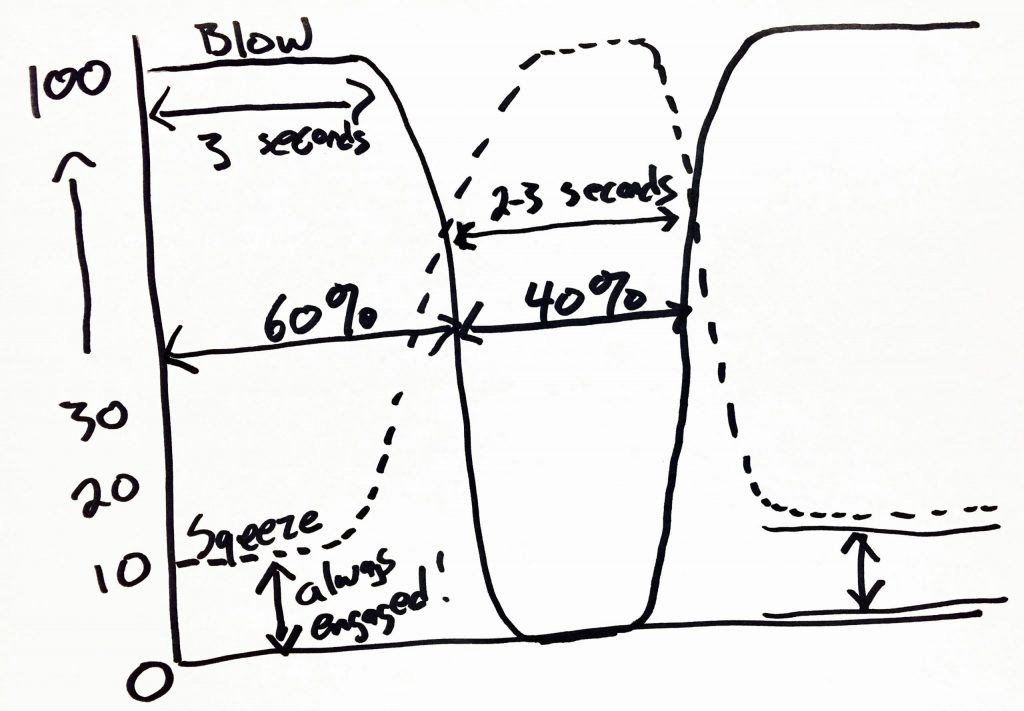