'Bagpipe' is actually a classification of musical instrument, not the name of a particular instrument. At the most basic level, a bagpipe is an instrument with two sound-producing pipes. One has a fixed note, the drone, the other holes to change notes, the chanter. Both of these use reeds. They are attached to a bag that acts as an air reservoir and they have a pipe to blow into.

With that definition, bagpipes can be traced back to almost 1000 BCE based on a sculpture found in Euyuk in the Middle East. While most people say Nero fiddled while Rome burned the actual instrument that he played was a tibi utricularis, which is a reed pipe fitted with a bag held in the arm pit. That fits the definition of a bagpipe. So we have historical evidence that some form of bagpipe (a blown, reeded instrument with an air reservoir) has been played for at least the last 3,000 years.

It is thought that the bagpipe was spread through Europe and into the British Isles by the Romans. Looking at old manuscripts and artwork, there is clear evidence of bagpipes being used throughout Europe, especially in the Eastern Roman Empire. There is Persian documentation of an instrument call the slandj which is commonly translated as 'bagpipe'. A variation of this instrument called in Greek the dankiyo is recorded as being played as early as the 9th century. A version of this is still being played today.

Starting in the 10th century use of the bagpipe becomes more evident in artwork and literature. Bulgaria has a version called the kaba gaida which is a fixture of traditional Bulgarian music.

The 14th century shows concrete evedence of the baghet, the northern Italian version of the bagpipe. It's thought though to be much older than that. This version has a chanter and single drone, which rests on the shoulder. Southern Italy has a version called the zampogna, which is based on an earlier Greek instrument. It has a chanter and several drones that extend from a single cartridge on the front of the bag.

There are different types of bagpipes found in Turkey, Macedonia, Galicia, India, Hungary, Poland, Sweden and many other countries. These are all thought to have developed from the spread of Roman, Persian, and other groups as they moved across the old world.

The first concrete evidence of bagpipes in the British Isles comes from the Canterbury Tales written about 1380. Clan Menzies have a set of bagpipes that they claim were played at the Battle of Bannockburn in 1314. This set has chanter that is very similar to the modern bagpipe, with the same number of finger holes, but there is only one drone.

The first concrete reference to the highland bagpipe comes from a mention of their use at the Battle of Pinkie Cleugh in 1547. The book Images of Irelande from 1581 contains a woodblock print of a wounded soldier. This soldier is clearly labeled as a piper and there is a set of two drone bagpipes laying next to the body. This marks the bagpipe's first recorded reference of use in Ireland.

The 1800s saw a resurgence of the popularity of the bagpipe in England and Scotland. Increased use by British military units in Scotland, Ireland, and Northern England helped to standardize the music. The infatuation with Scottish culture and dress during the Victorian period led to increased study into the history of the bagpipes and the further standardization of the music and the instrument. In fact, the 'standard' three-drone Highland bagpipe was only formalized in the 19th century. Before that, different configurations (two-drone; common stock) were a familiar sight in Scottish competitions.

The 20th century is marked by the globalization of the Highland bagpipe. WWI and WWII helped fuel the spread when soldiers from many nations saw the heroism of the Scottish pipers and brought a passion for it back to their home countries. The increased ease and distribution of bagpipe music that came with the invention of the vinyl record helped spread further interest in its music.

Bagpipes and their music will continue to spread. Modern communication, the internet, and the ease of manufacturing insure the survival of bagpipe and the continuing spread of its music.

If you're new to Dojo University, make sure you check out the 11 Commandments of Mastery to learn some fantastic ways to set yourself up for success with practice.

And if you're not yet a Dojo U student, where have you been?! Sign up today to join our thousands-strong global community of pipers – we'd love to welcome you and get you started.

You may have seen the viral news story of the so called 'bagpipe lung'.

Apart from this not being a real thing, what it boils down to is a man in the UK contracted a rare infection that might have been caused by an unclean bagpipe bag.

Whether or not this is true it raises the issue of keeping bagpipes clean and free of disease – something that has never been more important in current times.

If you thought some of the other tunes we've gifted were oldies... just wait until you get a taste of this one! Veni Veni Emmanuel… 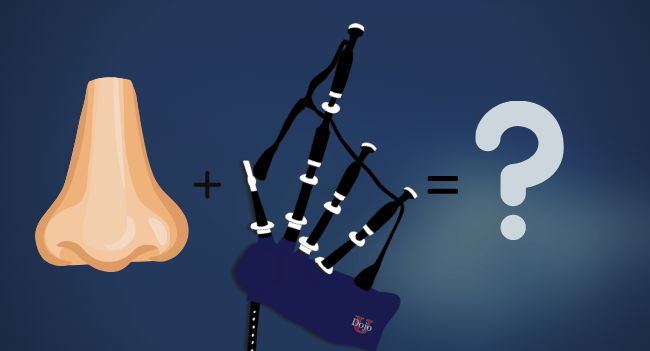 I recently had a student mention to me that their uncle told them Donald MacPherson could play his bagpipes with his nose. And, I have…